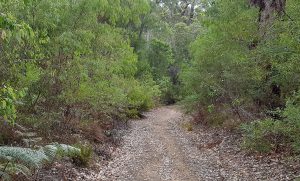 An example of a fire access trail in South Coast region of Western Australia. 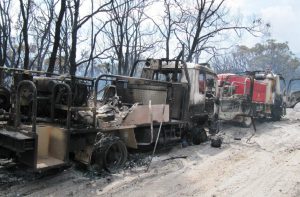 Firefighters on the South coast of Western Australia routinely work in heavily wooded areas along narrow trails. There is often insufficient room to turn the truck around and make a run for safety in the event of a burnover. Since 1980 there have been 38 firefighter fatalities from burnovers in Australia.

In spite of every effort by the agencies to "fire harden" the trucks, the reality is that a severe burnover can overwhelm the vehicle's defences and set fire to it. The crew is then forced to escape from the cab before it becomes a death trap. We also know that the immediate vicinity of a burnover can remain a hostile environment for an hour or so.

That started me working on the project and the result is a simple, effective device that fits to the back of a truck and in which the crew can shelter from a burnover. It uses no water, no chemicals, no pumps and no electrics. The Shadrach is immune to pump failure, smoke ingestion, oxygen starvation and is pretty much fail safe. It will stand flames of 1,000C for extended periods (>20 minutes). It has been tested, it works, is patented internationally and we are seeking expressions of interest from manufacturers.