There have been 38 firefighter fatalities from burnovers in Australia since 1980. and this is a common topic of conversation on firetrucks. I was on night shift patrolling a fire started from a marijuana plantation in heavy scrub west of Denmark one night when my co-crew said "We should be doing something about burnovers! I don't know what, but we should be doing something."

That started me working on the project and the result is a simple, effective device that fits to the back of a truck and in which the crew can shelter from a burnover. It uses no water, no pumps, no electrics, is pretty much fail safe and will stand flames of 1,000C. It has been tested, it works, it is patented internationally and we are looking for expressions of interest from manufacturers. 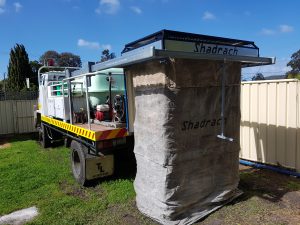